TOKYO: Following the first meeting of the Global Ports Hydrogen Coalition this week, the International Association of Ports and Harbors (IAPH) has agreed to provide its Sustainability platform for Coalition projects.

IAPH established the WPSP in 2018 to unite sustainability efforts of ports worldwide by sharing best practices via partnerships and its project portfolio.

The initiative determines how hydrogen can contribute to cleaner energy systems while promoting sustainability, resiliency and energy security in three areas:

The Hydrogen Coalition was set up in June this year by port, government and industry representatives to expand the production and use of low-carbon hydrogen and hydrogen-based fuels in industrial coastal areas.

IAPH Technical director Antonis Michail commented: “This collaboration is further step forward for our IAPH World Ports Sustainability Program, as well as our ambition to expand the remit of our IAPH Clean Marine Fuels (CMF) working group, to support the global port community in safely and efficiently adopting all potential future low and zero carbon fuels, now and in the future.”

BOSTON: With less than three weeks to the UN COP26 climate conference in Glasgow, IATA member airlines have resolved to achieve net-zero CO2e emissions by 2050. This means they will have to abate a total of 21.2 Gigatons by then.

According to association director-general Willie Walsh, 65 percent of the target will be achieved using sustainable aviation fuels (SAF); 13 percent by new propulsion technology including hydrogen; 19 percent from carbon capture and offsetting; and 3.0 percent from efficiency improvements.

Walsh says the “huge challenge” will require the collective effort of the entire value chain; supportive government action including a single air traffic environment in Europe; and all sector stakeholders addressing the environmental impact of their policies, products and activities including:

“Achieving sustainable global connectivity cannot be accomplished on the backs of airlines alone,” Walsh declared. “All parts of the aviation industry must work together within a supportive government policy framework to deliver the massive changes that are needed, including an energy transition.

“That is no different than what we are seeing in other industries. Road transport sustainability efforts, for example, are not being advanced by drivers building electric vehicles. Governments are providing policies and financial incentives for infrastructure providers, manufacturers and car owners to be able to collectively make the changes needed for a sustainable future. The same should apply to aviation,” he added. 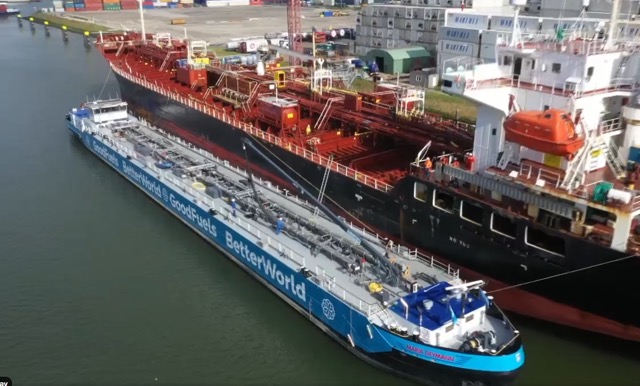 LONDON: The International Chamber of Shipping (ICS), representing 80 percent of the maritime market, says it wants governments to ensure the International Maritime Organization (IMO) adopts a net-zero target by 2050.

Echoing a call by the aviation sector, the ICS says the goal will only be achievable if governments support a compulsory R&D fund to develop zero-carbon technologies and develop a carbon levy to pay for more expensive fuels.

The chamber says the levy will help close the price gap between zero-carbon and conventional fuels and provide the billions of dollars needed to deploy new bunkering infrastructure.

“Talk is cheap, and action is difficult. So, our net zero offering sets out the ‘how’ as well as the ‘what’ for decarbonising shipping by 2050,” explained ICS chairman Esben Poulsson. “We’re saying to governments that if they really want to reach net-zero, they need to move from empty commitments to tangible action.

“A net-zero carbon ambition is achievable by 2050. But only provided governments take the unglamorous but urgent decisions needed to manage this process within a global regulatory framework.”

Two weeks after the COP26 conference in Glasgow next month, an IMO meeting will discuss the adoption of a net-zero target to encourage governments, shipbuilders, energy providers, engine manufacturers and shipowners operate zero-emissions vessels by 2030.

ICS secretary general Guy Platten noted: “This is a unique case of an industry demanding to be more tightly regulated on carbon emissions, and putting its hand up to do the grunt work of getting there. We’re not trying to win headlines – we’re trying to reach net-zero.

“If a net-zero target is to be more than a political gesture, governments need to recognise the magnitude of the challenge of phasing-out CO2 emissions from large oceangoing ships,” he added.
Read more: Maritime sector... Add new comment